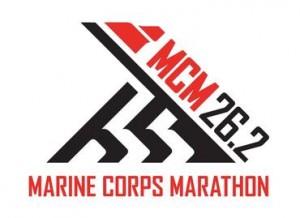 It’s one of the largest marathons in the country and this year it played host to over 32,000 runners. While you don’t have to qualify for it like you do the Boston Marathon, you do have to be quick on the draw to register. As a matter of fact, apart from events like the “1775 Run” which guarantees you a spot should you decide you want to run the MCM, it’s hard to get in. But my buddy, Jim Radigan, who I’ve known since the 4th grade, reached out to me and suggested we do this. 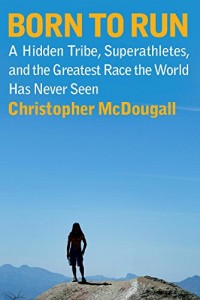 Jim’s story is worth telling. Earlier last year he was convinced his running days were behind him. His knees would throb after any kind of impact which made running a painful experience. But then, with some encouragement and counsel from his daughter Madeline, who’s a certified Dietician and a very accomplished runner in her own right, he read a book called, “Born to Run” which teaches you how to run on the ball of your foot which facilitates a natural shock absorber kind of effect as you run (click on the image to right to learn more). It’s counter intuitive to the way we typically think of running – just look at the way most running shoes are designed with the majority of the padding built around the heel. But when you run on the ball of your foot, you’re running in a way that’s more consistent with the way you were created to run. Just try running on your bare feet and you’ll notice how you intuitively target the thickest part of your foot which is the area just behind your toes.

Anyway, he started running again and before you know it the notion of meeting the challenge of a full blown marathon seemed plausible. He asked if I would be interested and I said, “Sure!”

We ran the “1775″ run and were able to complete it in time to qualify for a spot with the USMC Marathon. Thus began a training regimen that targeted October 22nd as that point where we needed to be conditioned to the point where we could run for the better part of five hours and make it to bridge before the cut off time.

The bridge is a specific landmark that runners were instructed to pass before a particular time frame due to the fact that they had to start opening up the roads to traffic. We were able to beat the time by 45 minutes, so we were good to go.

It was a great experience and, while this was my second time, the thrill of crossing that finish line is no less fulfilling. The one thing that struck me this time, however, were the number of people who were having to, either negotiate some serious physical challenges to run or they were simply running at a point that many would consider well past their prime.

Perhaps the reason I was so much more sensitive to runners like that is because of the way some will look at me like I’ve got monkeys flying out of my nose when I say I’m running a marathon. They say things like, “Oh, I could never do that!”

Consider the video that I have to the right. This is a guy with no hand and no arms. He was participating a marathon by using a small boot and moving himself along pushing himself with his right “stump.”

There was another woman whose gait suggested she had some issues either with her spine or her pelvis. Either way she looked like she was having to deal with a challenge that most don’t have to worry about. 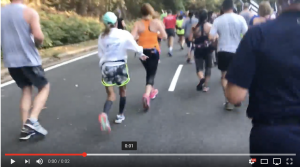 Yet, she was running. Not fast and not in a way that looked especially graceful or comfortable, but she was doing it!

Finally, there was something called the “Blue Mile.” It was an entire mile lined with the pictures of service men and women who had lost their lives in combat. It was almost reverent as you ran because throughout the course you were constantly surrounded by people ringing bells and shouting encouragement to you. But during this part, it was completely quiet. That is, until you got to the second part where the family members of those who had died were there holding American flags cheering you on. It’s ironic that those who had given so much were the one’s encouraging you when you felt like it needed to be the other way around.

All throughout the course, you saw people whose very presence got your fired up. People, who many would probably process as “beyond their prime,” yet still enduring a grueling several hours and, in so doing, demonstrating the kind of heart that’s characteristic of those who you inevitably aspire to. 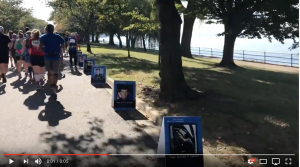 The following morning, we were having some breakfast watching the local news’ coverage of the Marathon and there was one lady being interviewed who expressed her appreciation for the event by saying how much she just enjoyed the “spirit of the Marine Corps.” There’s no doubt that you get inspired by running through Washington D.C. and seeing the Jefferson Memorial, the Washington Monument, the Pentagon and pondering our nation’s heritage and history. And then having squared away Marines stationed at every two miles handing you water, giving you high fives, and encouraging you certainly gets you fired up as well. But I think the woman who articulated her disposition by citing the “spirit of the Marines” is actually a great way of summing it all up in that with the Corps you have an enthusiastic respect for our country and all of that which makes it great. Running a Marathon is fulfilling, but being able to do that in the context of an event that proclaims the substance and the strength of our nation so profoundly is downright gratifying.

The Black Robe Regiment When does Statistical Economic Disparity NOT Indicate Racism?